Elizabeth Warren (Democrat) is running for the Senate seat in Massachusetts currently held by Scott Brown (Republican).  As her candidacy has unfolded, so has her past of fraudulence and continual lies.  Those things apparently aren’t bad enough.  Warren now wants to continue lying only it’s about Scott Brown and Republicans.  Rather than discuss the issues, she has chosen to outright lie about what legislation represents and not tell the truth about other policies.  Elizabeth Warren is originally from Oklahoma, maybe that’s why she has no respect for Massachusetts voters.

Below is a list of her recent lies and the actual truth, because the people in Massachusetts (and the entire country) deserve better:

The Equal Pay Act was voted on and passed in 1964 – long before Scott Brown was working in the Senate.  As a matter of fact, he was just a kid when that Act was passed (NOTE: only Democrats voted against it).  What Warren must be referring to is the Paycheck Fairness Act which is about lawsuits and forcing businesses to allow all employees to openly discuss what they are paid.  In fact, the Paycheck Fairness Act would actually hurt women  if it had passed.   Historical facts seem to be above Warren’s pay grade (earning millions does not make a person smarter).

There are no special tax breaks for oil companies.  “They are the standard relief afforded manufacturers, mining companies and other businesses to help recognize the costs of operations”  Increasing taxes on any company during a recession when unemployment has remained over an 8% high (thanks to Warren’s own political party) for 3 years would be voting for killing more jobs.    Apparently Warren doesn’t understand how business, the economy or the tax code works.  Scott Brown did the right thing for his constituents and the country by not voting to kill more jobs.

The ‘jobs bills’ Warren is referring to weren’t job creation bills but more spending bills.  After the debacle of the Stimulus that spent almost a trillion taxpayer dollars, Warren should know better than to think voters are willing to waste even more money.  The average cost per job ‘created or saved’ from the Stimulus bill was $300,000.  The private sector needs to create jobs and the House, with bi-partisan votes, has passed over 25 bills    that would not cost the taxpayers any money but would help create jobs in the private sector.  It is Democrat Senate Majority Leader Harry Reid that has refused to bring the bills to the Senate floor.  Maybe Warren should start hammering Reid over this.

Warren:  “The Republican agenda is to limit women’s access to health care services.”

Warren is referring to the fight over forcing religious institutions to provide contraception to employees even though it is against their religious beliefs.  Funny thing, ‘Liberal Lion’ Teddy Kennedy agrees with Scott Brown and many others, including Democrats and the Constitution that the government not be allowed to force this upon these institutions.  No one is limiting access to health care services.  Women are free to go into their local pharmacy and purchase birth control at very cheap prices.  Apparently Warren believes women are too helpless to be personally responsible for their own actions.

A number of local chapters of the National Organization for Women are denouncing  the DNC convention rules, saying that they unfairly exclude mothers with young  children. …

“Moms with young children 6  years of age and under who cannot be left at home, some of whom are  breastfeeding, are relegated to second-class status within the Democratic  Convention, unable to participate as a delegate due to antiquated policies and  inadequate accommodations that were apparently in place before Women’s  suffrage,” Susie Shannon, a delegate to the 2012 DNC Convention.

Exactly what type of credentials does Debbie expect children to have?  Is she going to demand ID like the Massachusetts Democrats did at their convention? 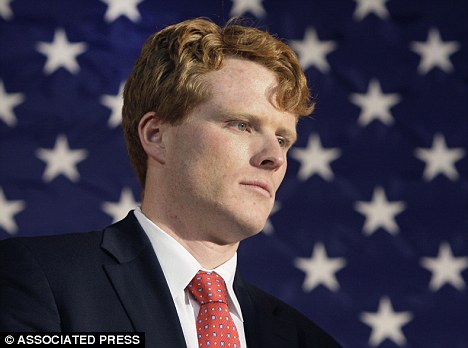 Joe Kennedy III, of the Massachusetts Kennedy clan, is running for State Representative in Massachusetts District 4 (which includes towns like Fall River, Brookline and Mildford). In an interview on August 20th with WickedLocal, Kennedy told the editorial staff that he is:

…open to new taxes, but said Congress needs to use a balanced approach that includes spending cuts and targets new revenue. The candidate said that he thinks people will be willing to spend more on taxes if there is a clear, certain plan to get the economy on track. [emphasis added]

The trust fund baby who has never had to worry about money a minute in his life believes that voters in his district, who are having a hard time putting food on the table, will be okay with higher taxes? He actually believes that people want to shell out more cash for a government that is already over bloated and extremely wasteful. Kennedy proves that he is completely out-of-touch with the realities of working and middle class people.

It’s almost egregious that he would mention raising taxes on people with a steady unemployment rate of 8.3% thanks to Democrat policies; foreclosures still happening and people with mortgages under water; food prices and gas prices continuing to rise and finally the fact that Massachusetts residents already pay a lot in taxes! Not to mention that he’d be raising taxes on the entire country, not just a district that would be insane enough to actually vote for him.

A disturbing trend with Democrats in New Hampshire

With the upcoming primaries only weeks away and the general election only a few months away, campaigns are in high gear all across New Hampshire. Both Democrats and Republicans are attending fairs and meeting constituents; talking to people about issues and explaining their platforms.  Most people are positive and excited to talk about their candidacy and why they are the right person for the State Legislature but there is a disturbing and very negative trend among Democrats that is the antithesis of what New Hampshire residents represent – negativity and lies about their opposition.   It seems that Obama’s and the national Democrats’ negative, smearing campaign style has ‘trickled down’ into the state and local level.

At the Kingston Days event this weekend both Democrats and Republicans had tents to provide information to voters.  The Rockingham Republican Committee had information available for candidates in Rockingham County as well as the gubernatorial candidates, Kevin Smith and Ovide Lamontagne.  They also had Romney signs and information.  The Kingston Democrats (no website found) had some information regarding candidates but they also had printed up lies about State Senator Russell Prescott’s votes in the legislature.  The information about the Democrat running against him, Carol Croteau, was simply a piece of paper asking for a donation with a website listed and nothing else.

The Democrats also had signs on their tent like ‘Don’t Touch My Medicare’, which is amusing since Obama cut $500 billion from Medicare in Obamacare.  They of course had the union solidarity sign (because public sector unions are all about bigger government and higher taxes, just like Democrats) and even an ‘I Stand with Planned Parenthood’ sign because Democrats love wasting taxpayer dollars on organizations that don’t need it.  The worst part is that they were lying about a State Senator rather than telling the truth or promoting their own candidate.  And he probably wasn’t the only one.

Lions and tigers and Tea Party, oh my!

New Hampshire Democrats thought they had an incredible scoop when they posted in a blog tonight that New Hampshire GOP regional field director Drew Cyr was ‘caught’ trying to enlist the help of a (gasp) Tea Party group for the November elections. They claim that the NH GOP is trying to ‘push’ the Tea Party agenda as if it’s a bad thing. Lower taxes, less government, less wasteful spending and more individual freedom are supposed to be bad things in ‘Live Free or Die’ New Hampshire – only if you’re a Democrat. It is so pathetic that the Brookline Democrats and DNC Chairman Raymond Buckley even retweeted it on Twitter.

For some reason Democrats in New Hampshire think that their ‘flying union monkey’ partnership of big government, higher taxes, huge pensions and wasteful spending is just dandy. Of course, their far left wing agenda hurts all residents in NH but that’s just a side effect of getting unions to buy elections for Democrats. To NH Democrats, their bedding the unions is absolutely acceptable but for the GOP to work with the Tea party, a group made up of Democrats, Republicans, Independents and Libertarians, is somehow almost criminal.

The problem for NH Democrats is that they cannot stand that the majority of people in the ‘Live Free or Die’ state of New Hampshire actually want less government, lower taxes and individual freedom. It kills them that they live right next to a state with huge government, high taxes and little individual freedom. In a recent study conducted at George Mason University, New Hampshire was scored as #1 in freedom and Massachusetts came in at a deplorable #46. So the very jealous Democrats in New Hampshire have to paint the Tea party as radical because the Tea Party represents everything they despise: lower taxes, less government and individual freedom. Are you starting to get the picture?