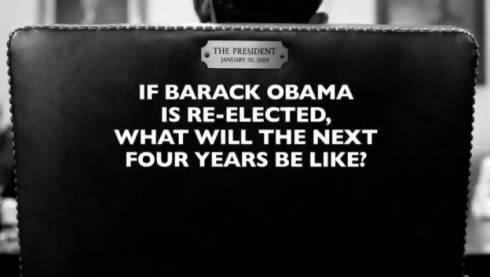 “Five reasons we can’t afford four more years of Barack Obama“ is the last line in the latest Romney campaign ad released today. Since Obama hasn’t bothered to actually lay out his plans for the next four years, Americans can only assume he’ll continue with the same failed policies of the last four years. The Romney campaign apparently feels the same way and has created a new ad called ‘The Obama Plan’. The ad has sound bites that show just some of what is going to happen over the next four years if Obama is re-elected along with the sources of the information. The campaign had a press release on October 18 that highlighted the same information with links to the sources.

From the press release:

President Obama may not want to talk about his second-term agenda, but he’s already laid out his plans for the next four years. The President has promised trillions of dollars in new debt, higher taxes on middle-class families, and devastating cuts to Medicare that will impact today’s seniors. Americans simply can’t afford four more years like the last four years. As president, Mitt Romney will deliver a real recovery by reforming our outdated tax code, creating 12 million new jobs, and strengthening Medicare for the next generation. – Andrea Saul, Romney Campaign Spokesperson

It’s interesting that the Obama campaign is always asking Romney and Ryan for more details about their plan when neither Obama nor Biden has actually explained what their own plan is for the next four years. If Obama’s plan is to continue his current policies, the country will be driven right over the fiscal cliff. What has ‘Obama’s Plan’ done over the last four years?

The above are direct results of Obama’s policies. Yes Obama ‘inherited’ a mess but what he did was create more of a mess. The Romney campaign ad is correct that we can’t afford four more years of Obama. More Americans seem to be paying attention in the final weeks of the presidential campaign season. More campaign ads will come out. There will be more 30-second sound bites. Will Americans actually pay attention and verify what they are being told for a change? If so, Obama is doomed.