Statistics and figures are not the Democrats’ friends. While they push to extend unemployment benefits yet again to the long-term unemployed, they fail to grasp that it is their own policies that are keeping these people unemployed. From the almost trillion dollar shovel-ready job stimulus that was thrust upon this country by Democrats ( including New Hampshire’s own Senator Shaheen and Representative Carol Shea-Porter) that failed to being insane enough to believe unemployment benefits create jobs, Democrats have failed on every level to produce (If unemployment benefits actually created jobs, our economy would be booming because we’ve had such long term unemployment). There are millions of people who are unemployed, under-employed, jumped ship to disability insurance or are just not working at all because they have given up and it’s thanks to Democrat policies that are killing jobs and hurting the economy.

Some facts from the Bureau of Labor Statistics:

Obama, Senator Shaheen and Carol Shea-Porter claim they care about workers, jobs and the economy yet it is policies they have put into place that have continued the long cycle of unemployment across the U.S. and in New Hampshire. Today they are pushing to extend unemployment benefits to the tune of $26 billion. Rather than address the issues that cause long-term unemployment, they continue to create it. Democrats have had 6 years to turn the economy around and they haven’t. Neither Obama, Shaheen nor Shea-Porter will ever admit failure but the unemployment signs in this country have certainly proven exactly that.

The New Hampshire Democrats hosted a fake “War on Women” rally in Concord yesterday.  According to the site, paid for by the NH Democrats, www.nhwomenunited.org(if you look up the domain registration on whois it was purchased by NH Democrats ) it claims to:  “Help defend women’s rights and pursuit of equality. Join Americans all across the United States on April 28th, 2012, as we come together as one to tell members of Congress in Washington DC and legislators in all 50 states, “Enough is enough!””

Interestingly the only issues their website discusses are abortion and forcing religious entities to pay for birth control.  There is nothing about the extreme poverty rates that women are in under Obama’s economy nor is there anything about the massive numbers of women now unemployed under Obama’s economy.   Of course the fact that this was all funded and created by the NH Democrats isn’t listed anywhere on the website (this is what Nancy Pelosi likes to call “astroturf”).

The rally was nothing more than a campaign push for Obama and other Democrats who have the same big government failed type policies.  Apparently the NH Democrats don’t realize that when polled, the most important issues for women today are jobs and the economy .  As a matter of fact, abortion and birth control are at the very bottom of the issues that are important to voters.  Abortion isn’t going away and birth control is cheap to purchase.  Planned Parenthood isn’t going away and they don’t need taxpayer money to survive.

The Democrats’ failed ‘War on Poverty’ is still failing 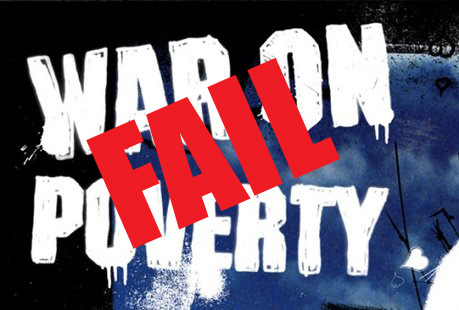 In light of the recent scandalous and outrageous EBT fraudulent abuses in Boston and around the state, it’s high time Beacon Hill starts discussing the Democrats’ failed ‘War on Poverty’. In a welfare state such as Massachusetts, where even illegal aliens get free health insurance and housing courtesy of the taxpayers, it’s long overdue to question the feeble attempts by lawmakers to continue the abusive programs that are not helping people and are hurting taxpayers. The original intentions of ‘welfare’ were as a temporary ‘hand up’ to help those who were in desperate need due to circumstances out of their control. That is no longer the case in Boston or anywhere else in the country. Democrats have created an entire segment of society which consists of people (their voting base) who believe that they are entitled to housing, food, clothing and healthcare paid for through the taxes taken from others who actually work for a living. This failed ‘War on Poverty’ is really a War on Taxpayers.