Who would You hire – Kennedy vs Bielat – Compare Resumes 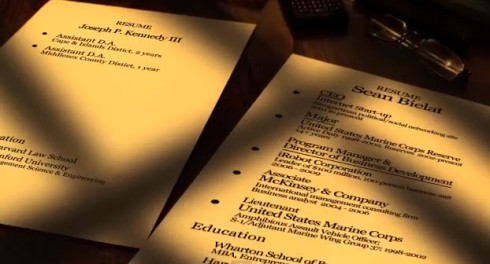 A new video has been created by the Bielat Campaign comparing the resumes of Sean Bielat and his opponent Joseph Kennedy III in the Massachusetts District 4 Congressional race. It’s painfully obvious that Bielat has far more experience than Kennedy. Kennedy literally only has a few years of experience working in the public sector. He has spent the majority of his life in school and living at home with Mommy. Bielat has many years of experience running successful businesses in the private sector and as a Marine Reservist.

Get an Exclusive sneak peek at the new video here.

This entry was posted on Sunday, September 9th, 2012 at 8:00 am and tagged with Election 2012, Joe Kennedy, MA4, Massachusetts, Sean Bielat and posted in Democrats, Election 2012, Elections, Progressives. You can follow any responses to this entry through the RSS 2.0 feed.
« Some Truth about Unions on Labor Day
Chicago Teachers Strike proving why Public Sector Unions should be Banned »