Some Truth about Unions on Labor Day 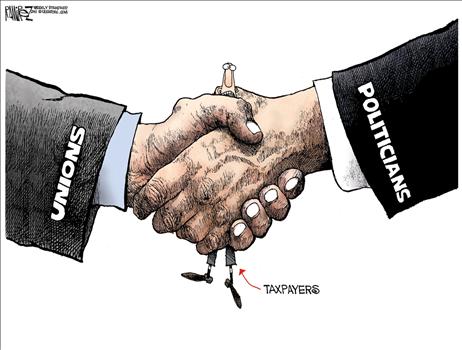 Every year unions take great pains to remind people why unions were (once) so great. They attempt to make people believe that unions are still necessary and great now. Unfortunately for union bosses, there is more truth out there now. They can hide from it but they can only run for so long. The fact is that unions do nothing but hurt the economy, taxpayers, consumers and the overall country now, including union members.

Less that 7% of private sector workers are unionized. Why? Workers are protected by a slew of federal, state and local laws. Businesses have realized that offering better pay and benefits will attract better workers, so they offer them. Workers don’t need to be unionized to negotiate their own salaries.

What has changed about unions? Since John F. Kennedy decided to allow public sector unions to organize in 1962(for purely political reasons), we have seen the unionization of millions of federal, state and local workers. Around 37% of all public sector employees are union members. What does this mean for governments and taxpayers? It means higher taxes, bigger government, a less productive workforce and an unsustainable liability of pensions and health care payments far into the future.

George Meany (former President of the AFL-CIO) and FDR were accurate when they agreed that public sector employees could not collectively bargain with elected officials. What has happened as a result? Unions pay big money to elect politicians (majority of money goes to Democrats) and then those politicians in turn pay back the unions by pushing for bigger government, higher salaries and bigger pensions. The tax payer ends up paying the price while have zero say in the collective bargaining negotiations. In Massachusetts an unskilled toll collector on the Massachusetts Turnpike made almost $100,000 in on year. His base salary is $60,000 not including his cushy benefits package . This is egregious and shows exactly how unions and Democrats work with each other in a symbiotic relationship that leeches off the tax payers.

This entry was posted on Monday, September 3rd, 2012 at 7:57 am and tagged with Democrats, Eleciton 2012, taxpayers, unions and posted in Democrats, Election 2012, Elections, New Hampshire Politics, Right-to-Work, Unions. You can follow any responses to this entry through the RSS 2.0 feed.
« Sexism is Alive and Well for Democrats
Who would You hire – Kennedy vs Bielat – Compare Resumes »