What difference does it make NOW, Hillary? 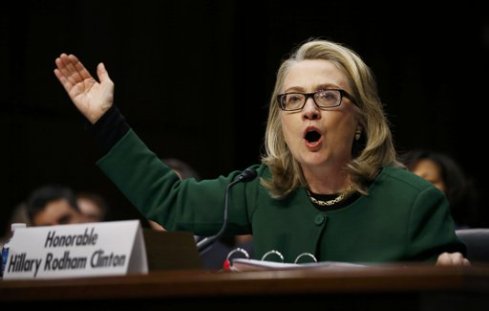 Today the House Oversight and Government Reform Committee held hearings on Benghazi with three “whistleblowers” who were involved with the outpost.  Both Democrats and Republicans took turns questioning the witnesses.  It was clear to any listeners (without seeing the party the Representatives were associated with) which party each Rep belonged to.  Republicans were fact seeking.  Democrats were perpetuating the budget lie and even the video lie that has been told over and over again by the White House.  What became crystal clear at today’s hearings is that both Barack Obama and Hillary Clinton knew immediately that Benghazi was a terrorist attack and not a protest.

Other things that also became clear during the hearings today were as follows:

When Hillary Clinton finally saw fit to testify before Congress in January, she made the despicable comment ‘What difference does it make’ whether it was a protest or a terrorist attack.   The difference, Clinton will discover, is that the truth matters to Americans.   It’s vital that our elected officials protect Americans and both Clinton and Obama failed.  It makes a difference that both Clinton and Obama knew the attack had nothing to do with a video yet continued to lie to the American people and persecute a man who had zero influence on Benghazi.   The difference that it makes is Americans deserve to know the truth.   The truth is quite clear – Hillary lied and four Americans died.   Clinton is directly responsible for what happened at Benghazi and Obama is directly responsible for what happened afterwards.

This entry was posted on Thursday, May 9th, 2013 at 1:53 pm and tagged with Benghazi, Congress, Hillary Clinton and posted in America, Democrats, Obama. You can follow any responses to this entry through the RSS 2.0 feed.
« NH Democrats vote to further victimize women
Why the Anti-gun crowd can’t be trusted and why their arguments fail every time. »