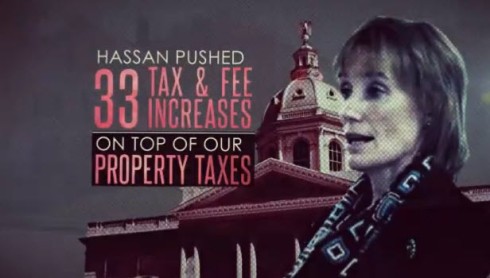 The RGA (Republican Governor’s Association) has put out a new ad that hits Maggie where it hurts, taxes. Hassan lives in the Principal’s home at Phillips Exeter Academy because her husband is thePrincipal. That’s all well and good except she doesn’t have to pay property taxes on that home. The ad claims that while Hassan raised taxes throughout her stint as a New Hampshire state legislator, she didn’t feel the same pain as others who actually pay property taxes. Hassan is claiming the ad is misleading and a personal attack as reported by Ben Leubsdorf in the Concord Monitor yesterday.

Taxes are a personal matter. Everyone gets hit with them in some shape or form andMaggie Hassan loves to raise them. Taxes affect the poor, working and middle classes the most. This fact doesn’t seem to bother Hassan because it really doesn’t affect her as much as the ‘little guy’ since she pays no property tax and is part of the top ‘1%’. Hassan has a very long track record of raising taxes on New Hampshire families. It’s part of her voting record. Hassan raised taxes and fees many times as a legislator. It’s simply a fact.

While the RGA ad does not explain why Hassan does not pay property taxes, the ad is factual by saying she doesn’t and by saying she raised them. The ad is factual by saying raising taxes doesn’t affect Hassan or her family as much as it does everyone else because she doesn’t have to pay those property taxes like everyone else (even renters pay this in the form of rent because property owners work this into the price of the rent). So Hassan can whine that this ad is misleading but it’s not. Hassan can whine that it’s a personal attack but it’s not. What is a personal attack isthe fact that Hassan will raise taxes. That affects everyone in New Hampshire but it affects those who can least afford it the most.